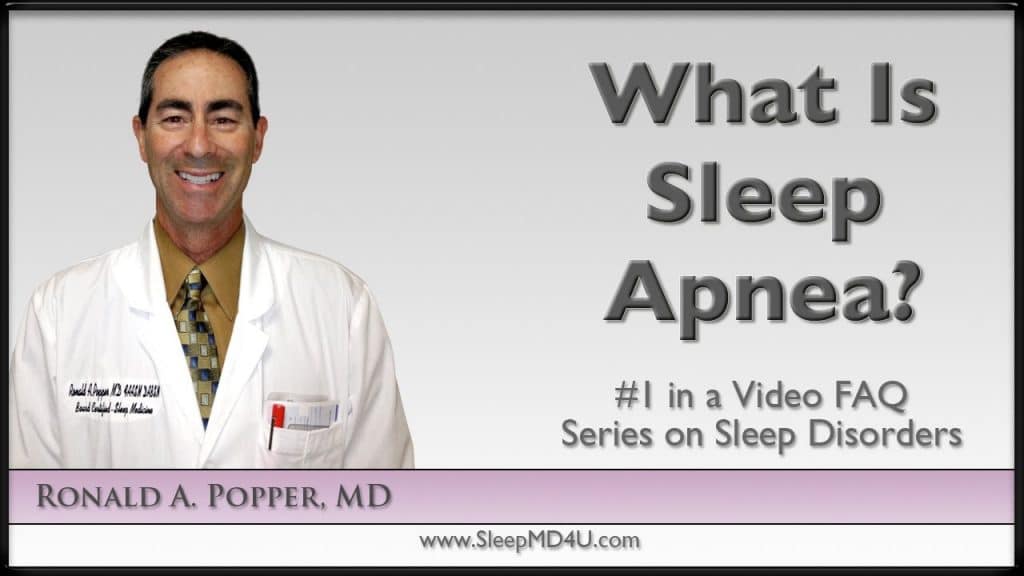 Video FAQ – What Is Sleep Apnea?

Sleep Apnea is a disorder manifest by snoring and holding of the breath. Patients are often unaware of the breath hold. They often will awaken with a snort, a gasp, or a grunt or choking sensation. They still may not be aware of this and these may only be brought to their attention by a bed mate or spouse.

Theravent May Be The Solution For Many

Theravent is a disposable nightly snoring device that is FDA approved to reduce or eliminate snoring. It has been proven to reduce snoring in separate clinical studies and is available without a prescription. On average, successful Theravent users reduced snoring by 76%, as measured using a decibel meter worn on the forehead. Theravent uses the same patented MicroValve Technology that was previously only available with a prescription.

Lisa Sigell of CBS2 news returned to Southern California Pulmonary and Sleep Disorders Medical Center for a second interview with me. This time the subject was severe and chronic snoring. Snoring is seen as a comical issue to many people, but it can disrupt a family's rest and lead to more serious health problems. Snoring itself may be an indication of an already existing health issue that needs medical attention. I discussed some new treatments with Lisa.

Tips For A Better Night’s Sleep #7

Today I’d like to talk to you about a sleep disorder called narcolepsy. Narcolepsy is manifest by a symptom complex consisting of excessive daytime sleepiness, cataplexy, sleep hallucinations and sleep paralysis. All of these symptoms do not need to be present to make a diagnosis of narcolepsy, but when excessive daytime sleepiness and cataplexy are present the diagnosis can be made clinically. In the absence of cataplexy a sleep study and another type of study called a multiple sleep latency test are required to confirm the diagnosis.

Tips For A Better Night’s Sleep #6

The most common drugs within this classification are Mirapex or pramipexole and ropinirole or Requip. The most common side-effects that occur when using these medications include headache or nausea, increased sleepiness or fatigue, and some patients feel drugged or have difficulties upon rising the next morning. There's a black box warning that talks about a very uncommon side-effect which is sudden uncontrollable sleep attacks. This is almost never seen in patients with Restless Limb Syndrome and has primarily occurred in patients with Parkinson's Disease who are taking vastly larger doses of this medication than patients with Restless Limb Syndrome would ever take.

Tips For A Better Night’s Sleep #5

In today's video segment, I'd like to talk about a disorder known as restless limb syndrome, more commonly known as restless leg syndrome. This is a disorder that is manifest by an irresistible urge to move, and it can be any part of your body, not just the legs. Most commonly, however, it involves the movement of your feet or ankles. This can be as subtle as the wiggling of your toes, flip flopping or tapping of your feet, or just this general urge to move any part of your body.

This is a disorder that occurs primarily when you are at rest such as sitting in a chair, in your car, at your desk, on a plane or a train, or most commonly while you are lying in bed prior to falling asleep. This disorder occurs most often in the early evening hours compared to the daytime hours. It is often but not always associated with some kind of an unpleasant sensation in the extremity. This can range from anything from pain or discomfort, to numbness, tingling, burning, creepy crawly sensation like bugs on the skin, or just this irresistible urge to move or a sensation of restlessness.

Although the FDA approved indications for Provigil and Nuvigil is to treat excessive daytime sleepiness (EDS) that occurs in narcolepsy, adequately treated obstructive sleep apnea with residual daytime sleepiness or the EDS associated with shift work, thousands of patients take the pill both legally and illegally because they’re simply tired and want more energy.

Dr. Popper was recently interviewed by Lisa Sigell of CBS2 news on the growing trend of “off label” use of these medications. Dr. Popper cautions patients to first have a thorough medical evaluation to rule out an underlying medical condition that may be causing the symptoms of fatigue, lethargy, lack of energy or cognitive impairment prior to resorting to treating a symptom with a medication that may not be the “magic pill” some believe it to be.

STUDIO CITY (CBS2) — A narcolepsy drug, dubbed the “Viagra of the brain”, is being used by some people to increase their brain function.

In this video session, Dr. Popper will discuss home testing for OSA ; when it is appropriate, and how to proceed correctly for a more accurate diagnosis. Home testing has recently been approved by the American Academy of Sleep Medicine for patients who will not or cannot participate in a clinical study, or whose health insurance will not cover a sleep center study.

How To Clean Your CPAP Device

In this video session, Dr. Popper demonstrates how to clean your CPAP unit for better performance and better hygiene. In addition, your CPAP device will last much longer if properly cleaned and maintained. If you use a CPAP device for obstructive sleep apnea, this short video demonstration should help you “sleep well tonight for a better tomorrow.”

Using Humidification with Your CPAP Device

In this session, Dr. Popper explains why using humidification with your CPAP mask will allow for a better night's sleep, and he shows you how to properly set up your CPAP device to add humidity. CPAP for obstructive sleep apnea can provide a much more comfortable night's rest when the humidification element is put to use.

In this video, Dr. Popper shows how to make an alternative to commercially available chin straps for patients who may be using Provent Therapy or a CPAP mask for obstructive sleep apnea.

If you're using Provent Therapy for OSA, or a CPAP device, but are having minimal success because you still sleep with your mouth open, the demonstration in this video can help. Dr. Popper demonstrates

What Our Patients Are Saying

Where to Find Us

To open and view the PDF documents available from this site, you may download a free copy of Adobe Reader here.